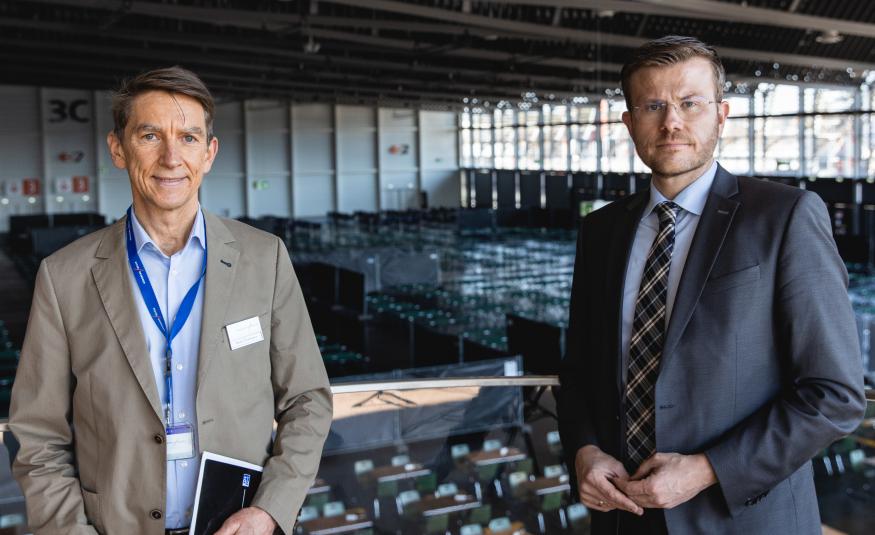 NürnbergMesse and the Nuremberg Municipal Fire Brigade have been fitting out Hall 3C of the German Exhibition Centre as an emergency shelter for up to 600 refugees from Ukraine.

Staff from the company’s Security & Logistics department worked with the city’s Fire Brigade to equip the 9,600sqm hall as a temporary shelter, subdivided into a day room area and a sleeping area. Camp beds have been put in place, shower and rest room trailers have been hooked up, and a continuous power supply has been installed. A separate play area for children is also included.

The city’s Social Welfare Office is managing the accommodation and mayor Marcus König visited the site to get an idea of how preparations are advancing: “Our warmest thanks to NürnbergMesse… We’re well prepared and can offer adequate space, protection and safety here for the people from Ukraine.”

The modern Hall 3C in the southwest area of the site has already served as a vaccination centre during the coronavirus pandemic.

“We want very much to do all we can to mitigate suffering, and thus to emphasise our solidarity with Ukraine and its people,” added NürnbergMesse Group CEO Peter Ottmann.

In recent weeks, NürnbergMesse had already provided logistics and catering from its subsidiary Lehrieder to support setting up an emergency shelter at the nearby Bertolt-Brecht-School in the Langwasser district of town.

The events site will be separated from the emergency shelter by a structural barrier that will also serve to protect the refugees during the hazardous set up phases in advance of events, and during the teardown work afterwards.

Nuremberg's Lord Mayor Marcus König (right) inspected the emergency accommodation for refugees from Ukraine that has been set up in Hall 3C by NürnbergMesse under the direction of Heinz Prießmann, head of Logistics & Security. Photo: Simon Rüger; NürnbergMesse