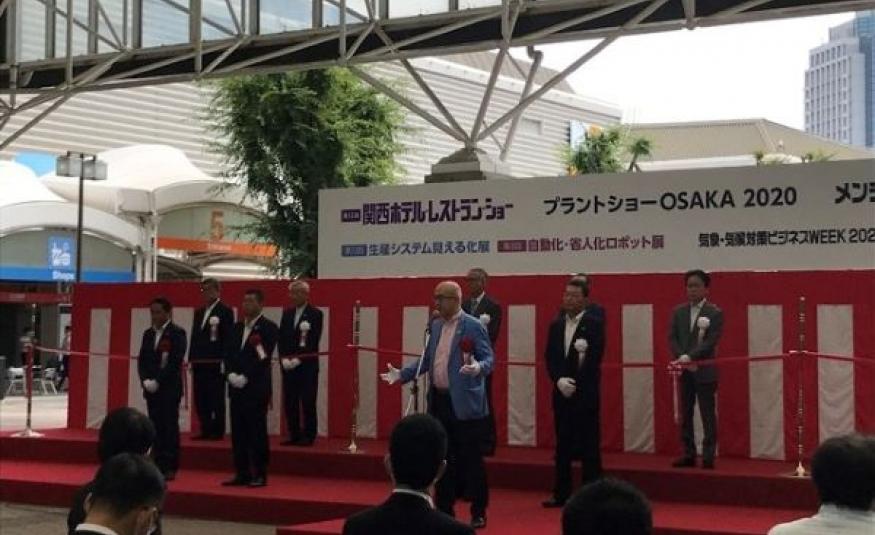 The 12th Kansai Hotel & Restaurant Show and five other co-locating events took over the entire INTEX Osaka facility, 29 July, as the exhibition industry returns following a national state of emergency due to the Covid-19 pandemic.

The 12th Kansai show is running until 31 July at INTEX Osaka, along with five other exhibitions which are involving a total of 460 companies at 830 stands throughout the INTEX complex. The exhibitions are the first large-scale B2B tradefairs to be held in Japan since the country lifted its national state of emergency.

Mizohata said in his address: “By firstly holding Japan’s first major exhibition amid the coronavirus pandemic, we want to send a big, encouraging shout to those concerned about exhibitions and international meetings held across Japan.”

During a show seminar on Infectious Disease Control Measures, the Osaka Convention & Tourism Bureau’s MICE policy director, Yoshikazu Tanaka, took the stage to explain the Bureau’s guidelines for event organisers, drafted under the guidance of Osaka City University’s Dr Tetsuo Kase of the Department of Public Health in the School of Medicine (also the Osaka Convention & Tourism Bureau’s infectious disease control advisor.) Mr Tanaka, who spearheaded the drafting of the guidelines, elaborated on what will and will not change for the MICE events during the “with-corona” era.

The discussion was also broadcast online.

The conclusion was that, like medical care, the economy is an important part of protecting human lives and the MICE industry is an engine for economic recovery, while infectious disease control measures continue, of course.

The Kansai Hotel & Restaurant Show is in Osaka for first time in 15 years.

The concurrent exhibitions co-locating at the Osaka venue are:

The main operational measures taken to ensure safety during the shows include:

Why is Exhibiting Still SO HARD?
Expert Opinion World Jan 17