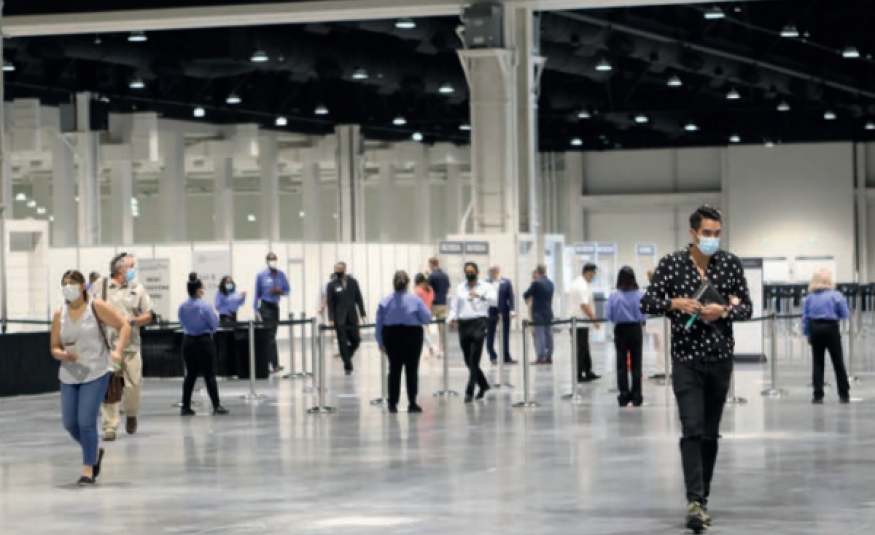 Stephanie Selesnick reports on two exhibitions on opposite sides of the US that braved the new world to put on a show, while pioneering new methods and rules of engagement.

A rare occurrence happened in August 2020 – a few business events took place in the United States.

One was the business-to-business Summer Las Vegas Market at the World Market Center (WMC), an International Market Centers property in Las Vegas, NV. Another was the Super Pet Expo, a business-to-consumer show held at the Dulles Expo Center in Chantilly, VA.

Both were held on private property – a key differentiator because most exhibition centres in the US are publicly owned.

Unlike the convention centres in Las Vegas, the WMC is designated as a merchandise mart, subject to similar rules as malls – 50% capacity indoors, so they were allowed to hold their event under current Nevada Covid-19 rules. Unlike past Markets, only permanent showrooms were permitted to open. Normally the biennial Markets also have temporary exhibits on the property.

Both shows were down in exhibitors and visitors, but overall organisers were pleased to have held the physical events. Roger White, senior vice-president, tradeshow and logistics operations, International Market Centers (IMC), credits extensive planning with the success of the largest B2B event held in the city since mid-March this year.

A Reopening Taskforce, comprised of representatives from all departments, met twice weekly, beginning just after the March government-mandated lockdown. Subcommittees were formed on subjects such as hotel shuttles, travel, logistics, registration, the arrival experience, and mask compliance. They spent a lot of time working through many scenarios, including safely managing egress of people from the 17-storey buildings at show close via the elevators.

Because there is no national policy on the pandemic response, including opening events, both shows (located on opposite sides of the country) faced different government hurdles in order to open safely. Organisers worked with respective government officials to ensure protocols were adhered to: “Engage your local government agencies and partners much earlier in the process than in normal circumstances. They may not understand what you are trying to do. Concessions may have to be made,” was their advice.

As part of a larger organisation, the Las Vegas Market team had a chance to test drive some of their proposed solutions on earlier events held at the Atlanta Mart in Georgia and High Point, North Carolina. It also had the expert advice of top epidemiologist Dr Carlos del Rio, from Emory University.

Eric Udler, producer of Super Pet Expo, is an entrepreneur forced to cancel his March show just eight days before it was scheduled to take place. For the new August dates, he first surveyed visitors from the last three years to ask if they were comfortable attending a physical show – and many said yes. Many exhibitors were thirsty for an opportunity to sell their wares.

As the third event at the Dulles Expo Center since reopening, Udler worked hand in hand with the venue to follow CDC (Federal) Guidelines as well as local and state government regulations, including requiring masks. “Best advice – speak with the local authorities, work with them and educate them on your events and make sure your facility is side-by-side with you every step of the way,” he said.

With some extra space in the halls, Super Pet Expo was able to increase aisle sizes and physically separated exhibitor stands. Super Pet Expo’s only last-minute, preopening hiccup was a requirement to hire two armed, off-duty policemen for the duration of the show. Why this addition on top of normal security? – Anti-Maskers.

Anti-Maskers are people who believe it’s their right to go without masks anywhere and everywhere. Unfortunately, in the US mask wearing – the known scientific way to help prevent the spread of Covid-19 - has become politicised.

Some anti-maskers have been known to get very loud or even violent when denied entrance somewhere unless they wear a mask.

It’s such a big deal that Las Vegas Market had designated ‘Mask Ambassadors’. This team circulated throughout the Campus reminding tenants and visitors to wear their masks properly. Part of their duties included handing out snack bar vouchers to conforming visitors as positive reinforcement of the mask policy.

The final numbers: Las Vegas Market: 40% of tenants (about 350 showrooms) representing 1,300 lines of furniture, along with 20% of normal Summer Market visitors. Super Pet Expo was down 43% on the exhibit floor and had one-third of normal attendance.

Regardless of the lower numbers, both organisers were pleased with the results of their safely held events. White’s last bit of advice to other organisers on reopening in a Covid-19 world: “Communicate in advance: what to expect, deliver the experience, and enforce the (safety) rules.”