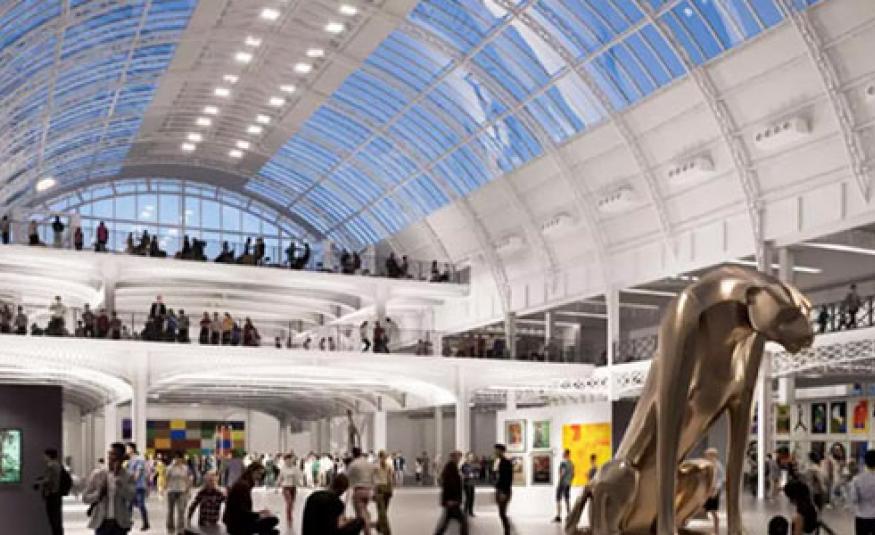 The chairman of investor YOO Capital and the MD of Olympia London unveil initial plans for the £700m (US$924,560,000) transformation of the venue site.

In early 2017, Olympia London made headlines when it was acquired through a joint venture comprised of YOO Capital and Deustche Finance International in a deal worth £296m.

Now, the venue and its investors have announced initial plans to convert the Olympia London site into a ‘cultural hub’, complete with restaurants, co-working spaces, hotels, an auditorium, open plan spaces and a modernisation and renovation of the existing conference and exhibition spaces.

“With the new ownership we had an opportunity to look at Olympia and say, ‘what could she be? How do we prepare her for the next 130 years?’” explains Nathan. “We wanted to come together and imagine how we could add value to the fantastic heritage and proposition, given the fact that we’re still residentially based, we’re bordered and there’s the railway line.”

Over a year after the venue was acquired, and after multiple public consultations and meetings with Hammersmith &; Fulham and the Greater London Authority, they have come up with a project intended to bring local residents and West London entrepreneurs onsite and to keep exhibition visitors onsite longer.

Due to the constrictions of the site, Hitchcox estimates the build will likely take around four or five years to complete, which he attributes to the desire to keep the events business fully running throughout the work and minimise any impact construction works might have.

“The aspiration is not to do it up and sell it,” he tells EN. “It’s a £700m spend and will be done in phases. You’ve got to keep the show on the road; we’re very sensitive to the role of exhibition organiser.

“We have to find a way to make sure that everything works alongside each other, and we have to work with our customers to ensure that the disruption is minimal,” says Nathan, adding that there are no plans to cancel or displace any of the events that the venue hosts throughout the year.

The impact on MICE events

The plans for the exhibition and conference spaces within the venue, says Nathan, are largely based around connectivity and ease of movement.

“The total space will be roughly the same as it is currently, we have no plans to massively increase the space, but we want to increase the circulation and flexibility of the space. Part of the feedback from [market research agency] Kantar TNS was that it’s difficult to get up and down and in and round.”

Existing plans to modernise the conference facilities at the venue will be delayed to run parallel with the larger redevelopment.

“It needed a big vision, because you can’t do these things piecemeal,” explains Nathan. “We’ve had planning permission before to put in a hotel, but that would be one thing in isolation. It would’ve added to the proposition but when we looked at the research we realised we needed to have a much more integrated approach.

“Standards are rising all around the world and we need to react to that in the UK, but also on the world stage. When you look at the site and walk around it and realise what you can’t do, it stops you from thinking you can do anything. It takes a breath-taking imagination and a huge sum of money to be able to do it, as we’re constrained as a site.”

The intention is to add value to the exhibition business by increasing the attractiveness of the site as a whole, rather than specifically increasing event space in the venue.

“The nature of where the exhibition business is going is that it’s much more experiential, and it’s much more of a day out. There’s an appetite for that,” says Hitchcox.

While the plans for the site are still being finalised, the emphasis is on emphasising the quality, rather than quantity, of event spaces at the venue.

“From the research that I do with SASiE (the Size And Scale index of Events), the industry isn’t massively growing" says Nathan. "Olympia London capacity is in accordance with industry growth and demand. We don’t actually need an awful lot more space; we just need the space to be better."

Nathan emphasises that the venue is eager to preserve its heritage while at the same time providing improved services, such as a better catering options.

"It’s very difficult given the business model we have, so we’ve gone for a radical rethink of that," he says. "It will take us to a completely different level. Make it more efficient and make it work harder."

“There’s a chicken and egg situation,” adds Hitchcox. “Earl’s Court obviously closed for a reason, and one assumes demand must've been down. The approach that we’re taking is that if we enhance the entire environment then that’s going to add to the quality of the events.”

The plans for the venue are still subject to change, however current plans will be available to view at Olympia London as part of public consultations before a formal application is submitted in September 2018.