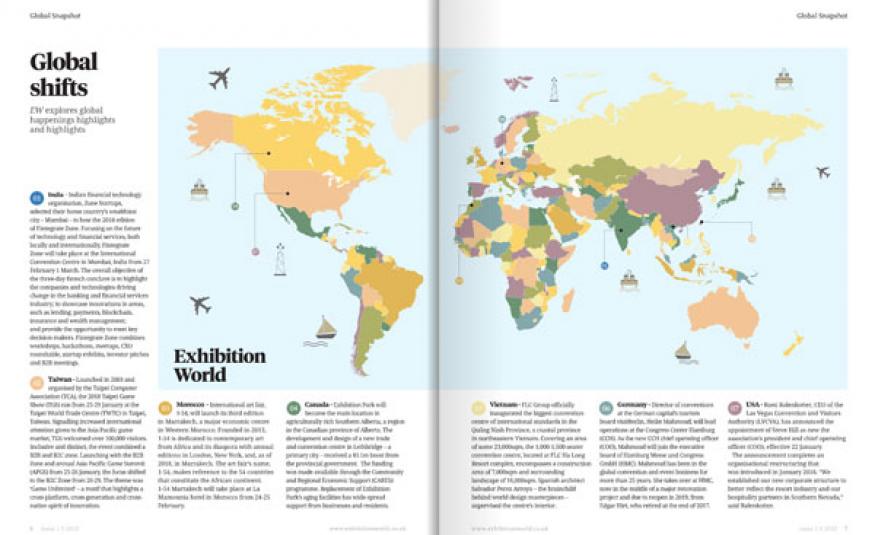 India - Indian financial technology organisation, Zone Startups, selected their home country’s wealthiest city – Mumbai – to host the 2018 edition of Fintegrate Zone. Focusing on the future of technology and financial services, both locally and internationally, Fintegrate Zone will take place at the International Convention Centre in Mumbai, India from 27 February-1 March. The overall objective of the three-day fintech conclave is to highlight the companies and technologies driving change in the banking and financial services industry; to showcase innovations in areas, such as lending, payments, blockchain, insurance and wealth management; and provide the opportunity to meet key decision makers. Fintegrate Zone combines workshops, hackathons, meetups, CXO roundtable, startup exhibits, investor pitches and B2B meetings.

Taiwan - Launched in 2003 and organised by the Taipei Computer Association (TCA), the 2018 Taipei Game Show (TGS) ran from 25-29 January at the Taipei World Trade Centre (TWTC) in Taipei, Taiwan. Signalling increased international attention given to the Asia Pacific game market, TGS welcomed over 100,000 visitors. Inclusive and distinct, the event combined a B2B and B2C zone. Launching with the B2B Zone and annual Asia Pacific Game Summit (APGS) from 25-26 January, the focus shifted to the B2C Zone from 26-29. The theme was ‘Game Unlimited’ – a motif that highlights a cross-platform, cross-generation and cross-nation spirit of innovation.

Morocco  - International art fair, 1-54, will launch its third edition in Marrakech, a major economic centre in Western Morocco. Founded in 2013, 1-54 is dedicated to contemporary art from Africa and its diaspora with annual editions in London, New York, and, as of 2018, in Marrakech. The art fair’s name, 1-54, makes reference to the 54 countries that constitute the African continent. 1-54 Marrakech will take place at La Mamounia hotel in Morocco from 24-25 February.

Canada - Exhibition Park will become the main location in agriculturally rich Southern Alberta, a region in the Canadian province of Alberta. The development and design of a new trade and convention centre in Lethbridge – a primary city – received a $1.1m boost from the provincial government.  The funding was made available through the Community and Regional Economic Support (CARES) programme. Replacement of Exhibition Park’s aging facilities has wide-spread support from businesses and residents.

Germany - Director of conventions at the German capital’s tourism board visitBerlin, Heike Mahmoud, will lead operations at the Congress Center Hamburg (CCH). As the new CCH chief operating officer (COO), Mahmoud will join the executive board of Hamburg Messe und Congress GmbH (HMC). Mahmoud has been in the global convention and event business for more than 25 years. She takes over at HMC, now in the middle of a major renovation project and due to reopen in 2019, from Edgar Hirt, who retired at the end of 2017.

USA - Rossi Ralenkotter, CEO of the Las Vegas Convention and Visitors Authority (LVCVA), has announced the appointment of Steve Hill as new the association’s president and chief operating officer (COO), effective 22 January. The announcement completes an organisational restructuring that was introduced in January 2016. “We established our new corporate structure to better reflect the resort industry and our hospitality partners in Southern Nevada,” said Ralenkotter.