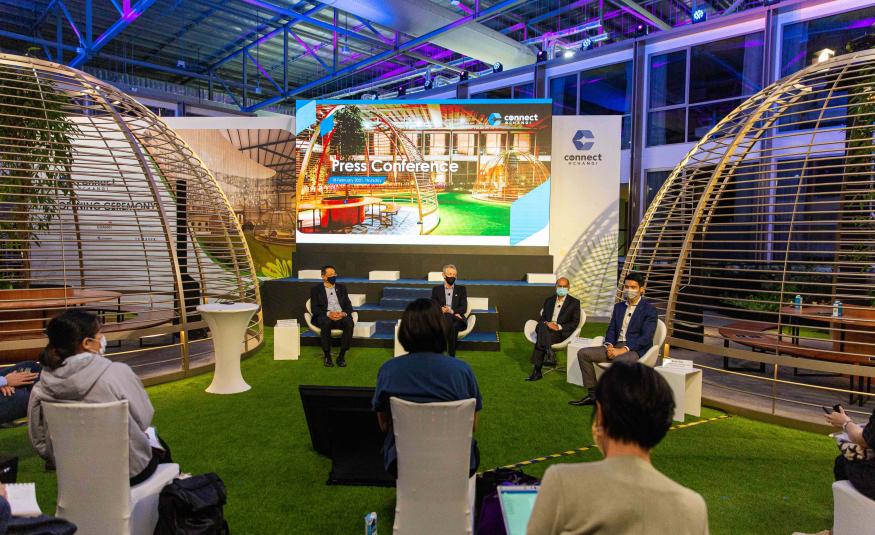 Temasek Holdings, owner of Singapore EXPO, has announced the launch of the first phase of Connect@Changi, a pilot short-stay facility designed to support safe meetings between international business travellers and Singapore residents.

The new international venue is located at the Singapore EXPO grounds near Changi Airport. The ‘bubble’ facility allows clients to attend meetings with local contacts in rooms separated by airtight glass. Documents can be sanitised and passed through special windows.

As the first facility to be appointed under the Connect@Singapore initiative, the new venue near to the airport aims to support the gradual reopening of the nation’s borders and spur business and economic activities, while safeguarding the local community from the Covid-19 pandemic.

Connect@Changi is launching with 150 premium guest rooms and 40 meeting rooms that can accommodate a range of meeting sizes, from four to 22 attendees. This will expand to around 660 guest rooms and 170 meeting rooms when the initial phase of the project is completed in May. When fully completed later this year, the facility will have the potential capacity to host some 1,300 business travellers at any one time.

Connect@Changi’s management is hoping the facility can play a role when the World Economic Forum arrives in Singapore in August. WEF had initially moved its tradtional meeting from Davos for a May date in Singapore, since pushed forward to August.

Guests at the Changi facility will stay in two-storey prefabricated hotel buildings set up inside the convention hall.

Inbound travellers using Connect@Changi will not be required to serve self-quarantine, on the condition that they accept various safety protocols including a PCR test on arrival.

“We are thankful for the government’s strong support and commitment to the Connect@Changi project, by appointing it as the first facility licensed to operate under the Connect@Singapore initiative,” said Robin Hu, head of international policy and governance, Temasek, and chairman SingEx-Sphere Holdings.

“Without such a facility, travel options are essentially binary – either stay at home due to travel restrictions, or fly overseas and endure long periods in quarantine. After close to four months of intense round-the-clock construction and collaboration with our partners, various government agencies, vendors and subcontractors, we are now ready to offer business travellers the option of resuming in-person meetings in a safe and contained manner, and do our part to catalyse economic recovery for Singapore and across the region,” Hu added.

Singapore's government is expecting a rebound to 4% to 6% growth for this year, with high hopes on international travel resuming.

Although Singapore held a successful TravelRevive pilot convention back in November, the anticipated travel bubble for general travellers with Hong Kong has yet to materialise.

The Conect@Changi project is a development by a consortium led by Temasek and which includes The Ascott Limited Changi Airport Group, Sheares Healthcare Group, SingEx-Sphere Holdings and Surbana Jurong.