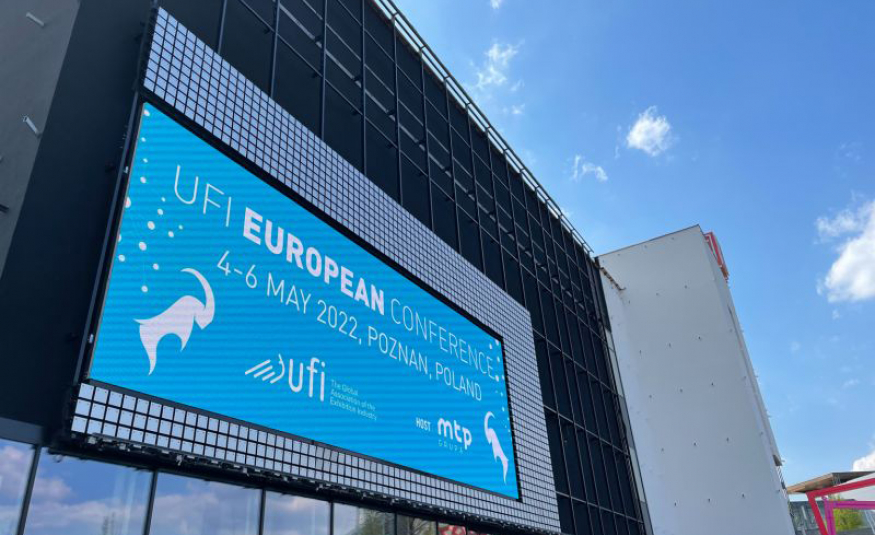 Stephanie Selesnick looks back at a great UFI European reunion in Poland:

About 170 delegates from the UK, Europe, the US, Southeast Asia, Latin America, and the Middle East converged on Poznan, Poland, May 4-6, for the UFI European Conference 2022. Themes of sustainability, the value of live F2B B2B events, and regionalisation came up time and time again.

The mood was joyous and upbeat in this first live edition of the European Conference since Covid. Live music abounded. A ukulele band and hula dancers opened the conference and a live band played between educational sessions enhancing the feel of a variety show atmosphere.

MTP chairman of the Board of Directors and host Tomasz Kobierski welcomed the delegates and was presented a silver plaque by UFI MD/CEO Kai Hattendorf. Natalia Urbanska-Guss, InSpire Foundation shared the efforts of MTP Grupa (host venue) and showcased the work of many volunteers and companies, including Fondazione Fiera Milano and Fiera Milano SpA who sent six trucks filled with supplies to MTP Grupa for Ukrainian refugees.

Ahead of the event participants were asked to bring toys, suitcases, new underwear and socks, colouring books and crayons as well as non-perishable foodstuffs for the refugees being housed at the venue.

MC Dan Ran interviewed Paddy Cosgrave, CEO and founder of Web Summit who candidly shared his thoughts on industry trends and want-to-be trends. Those included the rise of regional events driving attendance to a mothership event, co-ownership of data by tech providers and organisers, and role of the metaverse, AI, AR, VR and XR in future B2B events.

Web Summit is launching a new show in Rio bringing the event to Latin Americans who haven’t been to the Barcelona show. No doubt it will increase exposure and knowledge as well as drive visitors, exhibitors, and sponsors to the big international show, with organisers possibly launching more regional shows as well.

On data and software, Cosgrave said that some digital event platforms are trying to be like Amazon, taking over the events business and driving out organisers. Instead, they should act more like a Salesforce, providing, “the boring and very necessary back-end tech to help clients increase efficiencies in all areas of live events.” He called the metaverse and virtual conferences/expos a “distraction” from what large companies are doing (referring back to the Amazon analogy). AI, in his opinion, is mostly hype.

Focusing back on live B2B events, Cosgrave said the events industry should play a larger role in supporting SME’s, singling out German Messes as “hidden champions” of smaller companies. He called 365-communities “fools’ gold” saying festivals and events work for a reason – they are time limited, likening trying to make Easter week into Easter Year – which won’t work.

Next up was Mike Seaman, Raccoon Events who has taken his passion for running and turned it into 10 events (six in the UK, four in the US), with more on the horizon. He credits part of their success to “inside out marketing” and using some B2B tactics along with influencers to make their B2C events successful.

Sustainability is also important to Raccoon Events, with a goal to be net carbon zero by 2025. Seaman suggested measuring an event’s carbon footprint first, then reducing areas creating the most carbon. This includes providing information packets with tips to exhibitors and visitors to reduce their carbon footprints while participating in those events. Seaman also mentioned other sustainable efforts including funding local charities, and placing D&I front and centre.

His biggest fear? Keeping the 30 employees from burning out as the company grows, while looking to expand in the US and Europe, particularly Germany.

Natalia Hatalska, Infuture Institute, presented the results from the Future of Expos Study and said things are not going back to the way they were pre-Covid. Citing examples from the recent World Expo in Dubai, she said that AR/VR/XR are only as good as the tech – people will quickly abandon it as soon as there’s a malfunction. Instead, visitors crave sights, sounds, smells when engaging with a stand. She suggested using more Instagram friendly and interactive booths to entice younger generations.

Other sessions included the first in-person version of the Exhibition Think Tank where delegates crowd-sourced solutions to industry problems and presented conclusions the following day. (Disclosure: I was one of the facilitators.)

Day two also featured a session on attracting and retaining talent by David Boon, Brussels Expo and UFI European Chapter chair, Karin Krogh, Bella Center and Enrica Baccini, Fondazione Fiera Milan ,who pointed out our industry must better explain and promote the value proposition of working in it to attract the next generation to our business.

Olivia Ruggels-Brise, Greenview and Christian Druart, UFI ,updated the Events Industry Net Zero Initiative noting it’s a long-term process and we won’t get there overnight. A Quick Guide to Getting Started is now available on https://netzerocarbonevents.org/

Also announced were the new UFI Global Exhibitions & Events Directory, the UFI 2022 Awards finalists, and an update of the green and digital transition in Tourism at the EU level.

The last session of the day was with entrepreneur Jakub Marszalkowski, Indie Games Poland who urged delegates to think about other exhibition business models besides selling square metres to deliver a great B2B live experience. He also agreed with Paddy Cosgrave’s opinions on VR being a gimmick and the failure of the metaverse because it’s antithetical to current use of the internet, as it requires users to commit to 100% immersion on a platform.