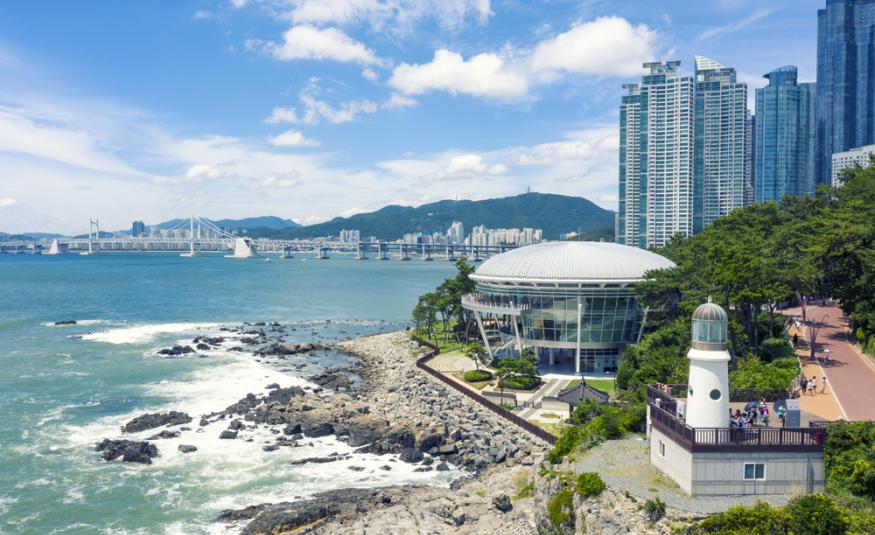 The MICE industry is a promising industry that is leading the era of the Fourth Industrial Revolution. As the MICE industry continues to grow each year, events packed with fresh ideas and witty concepts flood the industry, gaining much attention. Keeping in line with changing event characteristics and trends, even event attendees are increasingly expecting special experiences at locations that are more exciting than conventional event venues. The Korean Tourism Organization has selected the “2020 Leading Unique Conference Venues of Korea,” which include some unique Busan venues, designed to meet even the highest of expectations.

As a maritime city, Busan has many famous locations that border the Pacific Ocean, one of which is the Nurimaru APEC House. Located on Dongbaekseom Island next to Haeundae Beach, a leading spot of Busan, the Nurimaru APEC House is an architectural structure that was built for the 2005 APEC Summit. The building expresses the shape of a traditional Korean pavilion in a modern style, thereby achieving harmony between tradition and modernity. The vast ocean seen through the building’s large glass windows and the camellia trees and pine forest behind the building give visitors to this international meeting venue easy access to nature.

With its proud history of hosting various international events, including the aforementioned 2005 APEC Summit and the summit luncheon for the 2019 ASEAN-Republic of Korea Commemorative Summit, the Nurimaru APEC House is equipped with a large meeting space, cutting-edge facilities, and an outdoor banquet hall.

If Nurimaru APEC House is a place known for its traditional elegance, then The Bay 101, located at the entrance of Dongbaekseom Island, is a place known for its trendiness. Established as a “Complex Maritime Leisure Arts and Culture Space,” the venue has a yacht club filled with premium yachts for ocean cruises, various restaurants, and select shops. It also features large, open spaces including a large conference room, gallery hall, rooftop space and outdoor space, allowing event hosts to choose the space that best suits the nature or capacity of their event. The venue has also hosted the 2018 Busan International Medical Tourism Buyer Welcoming Reception and the networking party for ONE Store, the leading app store company of Korea.

The Bay 101 reveals its true charms after sunset. As the sun begins to set, streaks of gold spread across the ocean in front of the venue. When it gets darker, the brilliant lights of the skyscrapers of the marine city, located opposite the venue, add an extra sparkle to the nighttime sky. The Bay 101’s nighttime view feels like some sort of futuristic landscape, making events held at the venue seem extra cool.

The Busan Cinema Center is a complex image and culture space and is host of the famous Busan International Film Festival, the largest film festival in Asia, as well as various performances, exhibitions, and events. The building is known by its large roof, which seems somewhat intimidating when seen from far away. In 2012, the roof of the Busan Cinema Center was listed in the Guinness Book of World Records as the largest cantilever roof in the world. The Busan Cinema Center, which has a deep sense of harmonious architectural beauty, centered around its roof, leaves a powerful impression upon each of its visitors.

Under its large roof, the Busan Cinema Center houses a large, outdoor theater that can hold up to 6,000 people, making it easy to host large-scale events. The opening and closing ceremonies for the Busan International Film Festival have been held at the Center since 2011. The Center has also successfully hosted many large-scale cultural events and banquets, including the welcoming banquet for the 2014 ITU Conference and the GM Gala Night for the Busan International Motor Show. At night, the rainbow-colored nightscape, created by the LED lights installed on the roof, provide a magnificent ambience perfect for any event.

When you step into Museum DAH, filled with brilliant lights and visually fantastical images, you will feel as if you have just walked into a world of fantasy. Museum DAH, which was opened in 2019 as Korea’s first museum specializing in media, is a new digital space where you can meet the world of media, filled with endless change. The media art created by 8,000 LED lights, as well as the museum’s array of enchanting music and spaces, will provide visitors with a unique experience that can’t be found at any other venue.

In 2019, the venue, as a differentiated space filled with beautiful artworks, successfully hosted IT expo networking receptions and a networking party reception for G-Star. If you’re hoping to include unique and creative modern art images that break away from stereotypes in your next event, choose Museum DAH.

Even though contact-less, online events are on the rise due to COVID-19, the MICE industry is an industry that is based on communication between people and the merging of cultures. As such, the importance of offline venues cannot be stressed enough. Events that are especially memorable for your participating guests are what form the foundation of your organization’s success. If you are looking for a special location that reflects the beauty of the East, set against the backdrop of the vast ocean and filled with sophisticated and modern infrastructure with an artistic touch, look no further than Busan. We hope you will choose to host your next event in the city of Busan.