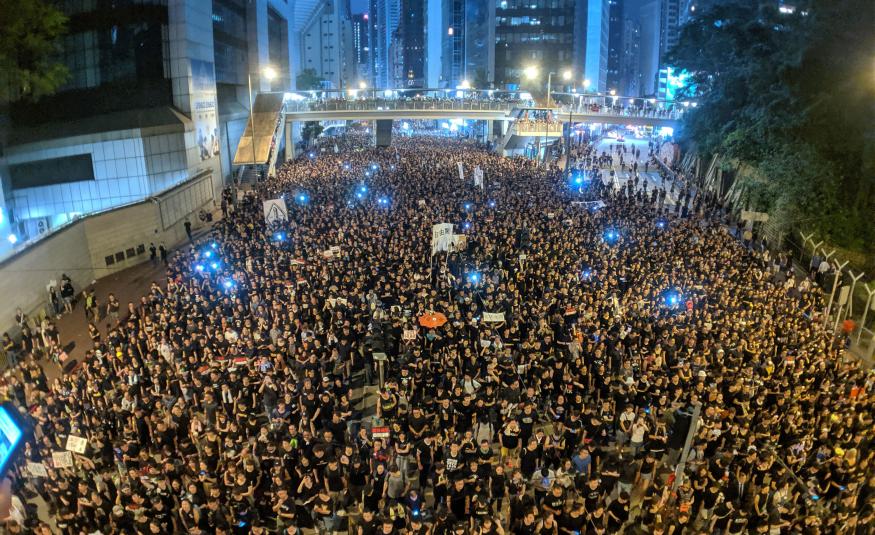 Hundreds of thousands of protesters took to the streets of Hong Kong at the weekend.

The rallies, held mostly in the rain, turned into a sea of umbrellas as the protests entered their eleventh weekend.

The rally was organised by the Civil Human Rights Front. Protests that began in June over a now-shelved extradition bill, have since expanded to focus on demands for greater democracy.

The Hong Kong government issued calls to “restore social order” amid fears that riot police and soldiers were massing in Shenzhen on the mainland.

The latest demonstrations follow ugly scenes at the city’s airport last week when two men accused of being undercover police officers were beaten.

There are signs that although some conventions and major events are still going ahead as planned, although some organisers and delegates are having cold feet and some concerts have been unable to take place.

A number of events, ranging from consumer expositions to tribute concerts, have been cancelled as protests have disrupted transit, blocked roads and caused flight cancellations. Scottish pop ban Chvrches cancelled their planned show at AsiaWorld Expo on 20 August, which was forced to suspend its operation for two days last week.

The Global Wellness Summit (GWS) decided to move its 13th conference to Singapore, to be held on the same planned dates of 15-17 October. Susie Ellis, Chairman and CEO of GWS, told The Straits Times, “the decision was made because the unrest in Hong Kong has increased”.

Japanese video game developer Capcom cancelled its CPT Premier Event at Esports Festival in Hong Kong citing “civic unrest”. A statement said: “Capcom takes the safety of our players and community very seriously. Given the civic unrest that is currently taking place in Hong Kong, we have decided to remove Esports Festival Hong Kong from this year’s Capcom Pro Tour. This decision in no way reflects upon the tournament organiser, Cyber Games Arena, and has been done solely to help keep our community and players out of potential harm.”

Over 200 flights were cancelled in Hong Kong on 5 August. And Cathay Pacific has said it has seen a double-digit drop in advance sales for travel to Hong Kong in the coming months because of the social unrest. Hotel group Intercontinental Hotels Group, said its revenue per available room in Hong Kong was down in the second quarter because of the political dispute.

The Hong Kong government’s Financial Secretary Paul Chan accused some of trying to ruin Hong Kong, “and completely destroy the livelihood of seven million citizens.” He also warned that the city risks a recession as protests continue. Several lines of the Mass Transit Railway (MTR) have experienced periods of suspension, and the Cross-Harbour Tunnel was also blocked and several businesses closed.

Ms Panadda Kongma, Head of Competence Center Agribusiness & Operations at VNU Exhibition Asia Pacific Co.,Ltd. Told CMW:  “The situation in Hong Kong is more or less the same as Thailand a few years ago. It will effect, in the short term, exhibition business as you could not travel easily to Hong Kong since the politic is unstable.

“However, the protest is more peaceful and nowadays digital world also becomes more and more important. You could find the way out from many channels during the unstable situation. In the longer term, I believe people still continue their normal business especially exhibition and conference in Hong Kong.”

MICE community leaders continue to put a brave face on things with Monica Lee-Müller, HML’s Managing Director, telling CMW in an update on 6 August: “Since a week ago, another large scale annual public fair International Baby/Children Products Expo has concluded with no major incidents.”