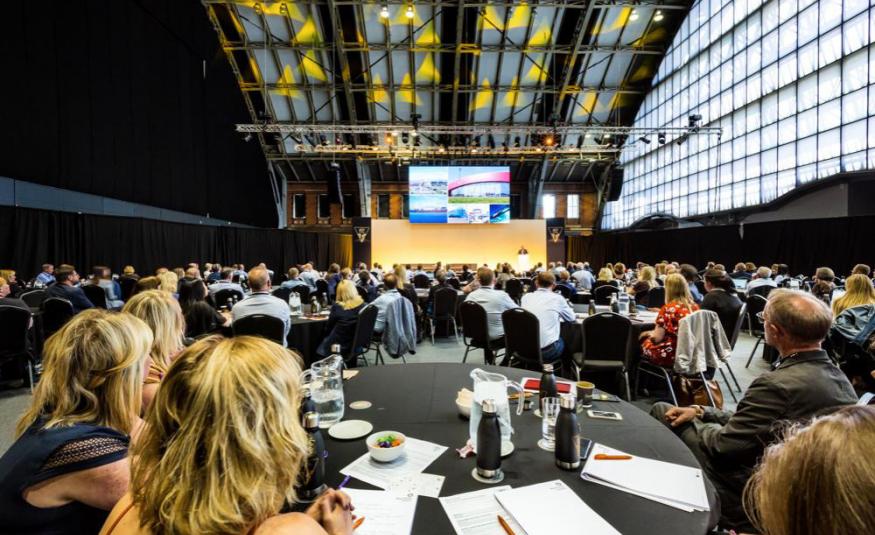 The Association of Event Venues (AEV) welcomed over 200 venue professionals and executives, representing more than 40 venues in the UK, Europe, and North America, to the AEV Conference at Manchester Central on 4 July 2019.

The theme of the conference, ‘New Horizons’, invited delegates to consider the 15 years leading up to the event, and to look forward to the next 15 years, and all the ways the world and the industry will have changed in that time.

The conference began with an address from Shaun Hinds, CEO of Manchester Central.

The conference content, focused around its ‘New Horizons’ theme covered a broad range of topics, beginning with a big-picture, futurological exploration of the venue sector with Graeme Codrington of Tomorrow Today Global, and concluding with a keynote address from Phil Jones MBE, MD of Brother UK Sale and president of Forever Manchester.

The afternoon panel session welcomed Kate Hardcastle MBE who first gave a compelling presentation on customer centricity, before sitting down with Shaun Hinds and Rachel Belam of Unibail-Rodamco-Westfield to examine how customers are changing, and how to put them at the heart of any operation.

Other speakers included Dan Thurlow, Chair of the AEV board and Director of Exhibition Sales at SEC, who took to the lectern to give a comprehensive rundown of the many achievements and milestones of the association; Kim Myhre of MCI and David Hornby of Why Not? who delivered a fascinating discussion on what ‘experiential’ will mean in the future; and Clare-Lena Miller-Davis from P&J Live who revealed how Aberdeen City Council and Henry Boot invested £333m in a state-of-the-art event campus outside the city, and explained the decision-making process behind a wealth of innovative features and community-friendly design decisions.

Michelle Baldwin senior event manager at NEC, said: “We’ve heard some fantastic material today, and I’ll be taking ideas about brand perception, changing visitor profiles, and attracting young talent, back to the NEC to discuss with my colleagues. It’s also a great chance to catch up with other industry peers and colleagues, and get a sense of the state of the industry at large.”

Rebecca Towell, business development manager at Manchester’s Event City added: “I came to the AEV conference to network with industry colleagues, learn something new and get inspired. And this year’s conference has delivered on all three counts, with great presentations looking ahead to the future.”

Speaking after the conference closed, AEV Director Rachel Parker summed up her feelings about the day, saying “It’s been an exhilarating day, and I’m incredibly grateful to Manchester Central for providing us not only with a superb venue for this special, 15th anniversary edition of our conference, but also our brilliant conference chair, Shaun Hinds.

“Bringing the conference to the north of England was in response to delegates feedback, and the move has been handsomely repaid with a day of compelling content from some of the most respected figures in business and events, as well as experts in their field.”

Parker finished by saying: “Every year since its inception, our conference has grown in size and stature, and it wouldn’t be possible without our conference sponsor, Ungerboeck Software, or our event partners, Blitz, The Barista, Explori, Glisser, ASP, Silverstream TV, Thirdspace Solutions, and of course Manchester Central. Their support for the AEV conference is invaluable.”

After the conference, delegates readied themselves for the AEV’s 15th Anniversary Party at Dirty Martini, Manchester’s premier city-centre cocktail bar. Beginning at 7pm, delegates were given props and costumes to create an elegant 1920’s theme, and party sponsors Freeman, provided “Freemantini” cocktails created especially for the occasion, where much fun was had by all.